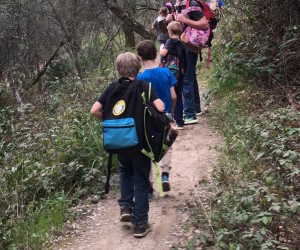 Last month I was a chaperone for my daughter’s fourth grade field trip to the Coloma Outdoor Discovery School. It is a three day, two night trip to Coloma where the students get to see what it was like to live during the Gold Rush and to learn about area, the native people, and the rich history there. Since I didn’t live in California during elementary school and missed out on the fourth grade requirement of the state’s history, I enjoyed learning all about it. However, part of my job as chaperone meant that I had to keep kids in line so I learned all about 1849 while my one roaming eye watched over the students (the same multitasking as motherhood).

In my group during the day there were three chaperones, the naturalist (who was the teacher and leader of the group), and about sixteen kids; so the ratio was pretty small between adults and kids. Overall, the students behaved well, but in any situation where nine and ten-year-olds have to pay attention when they could be throwing rocks in the river, means there was some goofing off, some talking, and sometimes just general rudeness (usually unintentional). They’re fourth graders, I would remind myself constantly as I broke up a giggle-fest over dog poop in the state park, or stopping kids from a Twister game in the grinding holes made by Native Americans hundreds of years ago.

Even with these interruptions, both the boys and girls did okay. They were just kids being kids, plain and simple. Since I have a fourth grade girl and know their familiar MO of talking, giggling, shrieking, and sometimes ridiculous drama, I found it interesting to observe the fourth grade boys in their “natural environment”of being around in each other in an outdoor class setting. Here are some things I noticed about fourth grade boys:

1) They’re physically affectionate. There were lots of hugs, arms around shoulders, and pats on the back. It was nice to see boys expressing themselves physically without worrying about what others might think. I don’t know when males stop doing this because of fears that they might be perceived as gay (which is the reason that they stop I’m guessing?), but in fourth grade, they still feel okay giving a friend a big hug, or a boy walking up and putting his hands on another’s shoulders. This physical attention was only reserved for other boys, however, the girls didn’t receive it from the boys or vice versa. I’m guessing that lots of teasing and embarrassment would result if such a monumental thing happened.

2) Boys must move. They can’t help it. They wiggle around, fidget, or get up and walk around to go mess with a stick (or any other object in their vicinity). Like their kindergarten counterparts, they cannot sit still. By fourth grade, they can pay attention a little longer and stay in a seat without falling out of it, but their need to move has not changed. If I had not witnessed this in my son and his friends, currently in their first grade class, I would have been impatient with their constant movement. I would have complained, “why can’t they sit still?!” but I already knew, they just can’t. They’re boys and they have the uncontrollable need to be in motion, that’s all.

3) They want acceptance from each other. Who doesn’t? Especially in elementary school when kids are figuring out this whole social hierarchy thing (that exists whether we like it or not). The boys I saw were either fast friends with each other or outside of the circle, wanting to get in (the exceptions were a few on the fringe, not caring). I watched a couple boys seeking acceptance so badly from other boys in the group. They tried

to be like the more popular boys, or attempted to get their attention. They would make jokes for the boys or offer some trinket they found; they just wanted to belong. And, unfortunately, it did not happen often. The clique of boys (yes, I realized that cliques aren’t just for girls) were not willing to let the other boys in, which only made those boys try harder, to no avail. We’ve all made the effort to try and be part of a group as kids, or as adults, and not succeed. I felt bad for them, but I couldn’t change their minds. They perceived the other boys as the “cool kids,” even if it was untrue, and they were determined to be part of that.

In the end, they were all good guys, even those who were obnoxious or did annoying things (like constantly walking in puddles). Over three days I witnessed a group of kids, boys and girls, who were still young enough to be innocent, open, and true. They haven’t closed up yet due to the hurts of adolescence or the pain of teenage years. They were just themselves, in all their splendor, as they approach the onset of puberty and the awkward years start. For some of them, this has already begun, which led me to my fourth observation of fourth grade boys – most of them stink. Really, truly, smell bad, and it was especially evident after a 5.6 mile hike. But the beauty of them is that they don’t really know yet, nor do they care. And that’s why we love them. Carry on, fourth grade boys, carry on.

If you enjoyed this post and want to be notified when more are posted, as well as hearing the latest news on my book, sign up in the top, right box. I won’t spam you, I promise!

My mom has Parkinson’s disease, yes that same one as Michael J Fox, and unless you read his books or know someone who has it, most may not realize what a terrible disease it is. It’s more than tremors or a shaky hand reaching for something. It will make my mom fall apart in the middle of a store, unable to move, frozen in her tracks, and she will be forced to take tiny baby steps in a confused state as people whip past her, annoyed at this slow old lady. It’s the realization that she now wets the bed every night because the disease is forcing her bladder to contract, so while she sleeps she unknowingly urinates. It’s slowly taking her mind and memories away due to the dementia side of the illness. And someday, as the progressive disease takes its toll, she will be unable to do anything on her own: eat, walk, talk, use the bathroom, enjoy her grandchildren, the disease will have taken it all.

My husband, my brother, and I watch this progression grimly. Rationally we understand the disease, it slowly cuts off her serotonin and other neurotransmitters so that the needed connections to move don’t readily work (that is putting it very simply). You lose control over that connection in which your brain tells your body what to do. We also know that there is no cure; medications can only help with the symptoms of the disease as it gets gradually worse. And the kicker is that the long term side effect of the main medication she takes ultimately leads to uncontrollable movements – just like her disease.

When she first got diagnosed I knew almost nothing about Parkinson’s disease. Like most people, I just thought it would make her hand shaky as she reached for the salt at the dinner table. Since I always think that understanding something and arming oneself with knowledge is the best route, I researched the disease. I found out what happens in the brain and what will ultimately happen as time goes by. It was a difficult read. As I grappled with her doomed fate, I cried a lot, and asked “Why? Why is this happening to her?” This is a woman who wouldn’t hurt a soul. She was a bank teller, raised her kids, learned to live her own life after divorce, and was always present for her family – why is something so terrible happening to her, I questioned. Then, I inevitably went through the “It’s not fair!” side of it, because it wasn’t. Why is my mom, a nice person, a model (more or less) human being, sentenced to this disease when child-molesting perverts, rapists, and jerks who scam old people get to lead healthy lives? It’s not fair! I angrily thought to myself.

And, no, it isn’t fair. That is true. But this isn’t about what is fair. That is just my way of caring and being angry about her illness. I know there isn’t some being in the universe, handing out punishments to bad people and rewarding the good. That is obvious by all the pain and anguish in the world. So, fair has nothing to do with it. And in the end, neither does the why. Why does she have this disease, why did she get it instead of someone else? It doesn’t matter why she has it, she does. And someone else has it too, approximately one million people in the US alone have Parkinson’s disease.

So, as hard as it is, I need to let these things go. Whenever we are faced with adversity or pain or tragedy, we often point to the why (and the government and news point to the who – as in, who is to blame for this). Then when the why (or who) isn’t answered, or even if it is, we go to the fairness of it all – and when is it ever fair? In the midst of something terrible nothing seems fair.

So I have learned to let these two things go most days and just accept that she has a terminal disease, and it’s not going away. Some days are good for her, others aren’t,

and it will get worse, but we are dealing with that as it happens. That is all. Is that easy? Definitely not. No one can watch someone get worse in tiny increments and think, “oh it’s okay, it will be okay” because it’s not. I cannot hide behind the false idea that “she’ll be okay” because she won’t.

The hard part lately is when my eight-year-old daughter said, “I wish we could take Nana’s disease and give it to someone else.”   It made me realize how my very-aware daughter is witnessing this too, and how difficult it must be for her as well. I just said, “I know, I understand, but we can’t.” “But it’s not fair!” she said emphatically. “No, it isn’t,” I said, “I agree, but it’s the disease she has.”  I can’t fix it or shield my daughter from her grandmother’s disease. None of us can. So, instead, we will continue to visit her regardless of her current state that day. We’ll stick by her, even when the disease takes it all, not knowing the reason why and just letting the idea of fair go. It doesn’t have a place here even if we want it to.  As we painfully watch we will hope that our presence will make it easier on my mom, the one, in the end, who is suffering the most.