Almost everyone experiences it, but now it’s my turn to know what it’s like. As of this writing, my mom died a little over two weeks ago. She had Parkinson’s Disease for thirteen years and finally succumbed to it. My family (but mostly my brother) and I watched her go from a functioning person to someone who was completely debilitated, and then mostly unconscious. In a sense we had been mourning her for many years. Each time she would decline, mostly mentally because Parkinson’s comes with its own horrible dementia, we would grieve.

And each time it hurt to see the person I once knew so well, degrade, and leave us a little more. First, being unable to remember things, then to delusions and hallucinations, then to the mind of a small child, and finally to someone who slept about twenty-three and a half hours a day and couldn’t communicate. Physically, she went from walking to using a walker then to a wheelchair and finally bed bound. The end stage of the disease is being unable to swallow, which gradually happened, along with losing whatever appetite she had for her pureed meals. She came close to dying multiple times due to various infections and sepsis, and I was convinced that ultimately would be her demise, but she managed to recover each time, although not fully in her brain.

So, when one of the nurses decided to call hospice (for the second time) because my mom had trouble swallowing and didn’t want to eat, I wondered, could it really be the end this time? Part of me didn’t think so, she had hung in there for so long. But you can’t stop eating or drinking for too long before it all catches up with you, and it did for her. Within a week’s time, she was on the brink, and we were told that she had less than twenty-four hours. My brother was at her bedside, my other brother was called, and I picked up my daughter from a friend’s house, planning to go there straight after. But it was too late. She left us late that morning, for the final time.

And it’s this finality that we all grapple with in grief – they are not coming back, ever. Even though I went to the nursing facility and saw her expired, peaceful body lying on her bed, so obviously without life in it anymore, I was in shock that it finally happened (and still am to a degree). I now realize that there was always this small, fictional hope in the recesses of my realistic mind, my own childish fantasy, that maybe she’d get better someday. Maybe some incredible medical innovation would happen and she would walk out of there. I knew in my brain, and in a large part of my heart, that this was completely illogical and would never happen. I knew this, but that tiny, impossible hope continued on anyway. Now, it couldn’t. Knowing that is hard to accept.

The hole that’s left behind is hard too. It’s like a chunk of yourself has been removed and it can’t be replaced. Time will dull the pain of the loss and that chunk may fill in a little, but I know that it can never be whole again.

Right now, it’s the the little things I notice that signal her absence – not needing to leave my phone on at night because the nursing facility may call, not working my visits with her into my schedule, not having that topic of discussion with my brother when we have our weekly phone call. That’s all done, over.

And I wouldn’t be honest if I didn’t admit that there is a great sense of relief in that. These years, especially the last five, have been so heart-wrenching and full of sadness. Watching someone decline in that way is a slow torture. My kids have no great memories of their grandmother and in the last couple years, we had to visit her at her window (due to Covid) and, if she could see us at all through her constant sleep, it was in masks. How can I not feel grateful that it’s now over? That’s from my perspective. For her, I can’t imagine what the last thirteen years were like and I never heard her complain once about her disease. I can only hope that this last period of her life was free of pain and excessive suffering. In the end, that’s what we all hope for.

May she rest in peace. 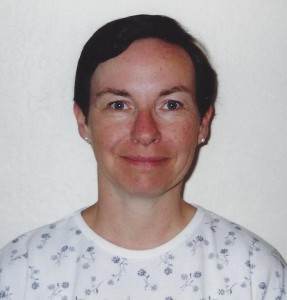 Anyone who has read my previous post about my mom (Letting Go of Knowing Why When Loved Ones are Sick) knows that she has Parkinson’s disease (PD to those of us now familiar with it). PD has all the terrible symptoms  one thinks of: with tremors throughout her body and “freezing up,” or the inability to walk because that connection from her brain to her feet just won’t work sometimes. But the hardest part of this illness, at least to my brother and me, is the dementia and the decline of her cognitive functioning. Like Alzheimer’s, Parkinson’s causes a person’s mind to slowly slip away. Lately, it’s become worse. The progression of the disease, along with a urinary tract infection that led to sepsis and put her in the hospital, seems to have made her “good days” become far fewer than her “bad days,” when she mumbles incoherently or thinks her walker is the portable commode.

My brother and I usually try to make light of her condition, attempting to find the humor in things, like when she kept referring to the physical therapist as the “power girl” (“when is the power girl coming over?”) or when she asked me very seriously if I had in my “possession two pounds of white See’s candy that looks like pajamas,” (I answered “No, sorry, I don’t” to that one). We don’t laugh at her or her condition, but we cope by finding humor in the absurdity of it all and marveling at the frightening and amazing human brain.

Yet, in other instances, we need to talk her off a metaphorical ledge and try to bring her into our current reality, like when she calls very concerned saying, “Dad died, will you take me to the funeral?” and I have to tell her that her dad died over twenty-five years ago. Then when she questions “well, who died?” and I tell her “no one died, Mom, you’re okay,” she is never fully reassured by this, and neither am I. We don’t know how we can help her, and unfortunately, there is not much we can do at this point, except talk to her and visit her. This brings me to the title of this post, “Progressive Disease Never Gets Easier – and I’m a Wimp,” because it is becoming harder and harder to visit her and try to act like everything is normal and okay while I’m there.  In my previous post I wrote, “So, instead, we will continue to visit her regardless of her current state that day. We’ll stick by her, even when the disease takes it all, not knowing the reason why and just letting the idea of fair g 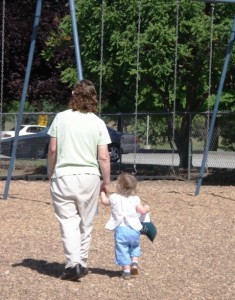 o… As we painfully watch we will hope that our presence will make it easier on my mom, the one, in the end, who is suffering the most.” Those words seem hypocritical now because I don’t look forward to seeing her and it’s hard to show-up with a smile. With two busy young kids in sports and other activities it is easy to let time slip by with practices or games and realize that I have not visited my mom in awhile. That fact makes me feel guilty, which makes me avoid the visit, which makes me guiltier, and so it goes.

We’ve all seen or read about families who leave their parents or loved ones to rot away in a nursing home or retirement place, never visiting, or doing so once a year for twenty minutes. I always thought they were uncaring jerks and questioned how people could do that to “their own parents!” but maybe now I see why a little more clearly. Maybe it’s just too hard and they can’t face seeing their loved one turn from a “normal” person to a nearly unrecognizable shell of who they once were. It’s agonizing to watch and too painful to accept, so they don’t. They hide, pop up once a year, and retreat back to their own world where this reality doesn’t exist. I get it and oftentimes would like to do the same, but I don’t. And yet, I could do more.  My brother calls my mom once a day and drives up to visit her once a month regardless of what is going on in his life. His strength and fortitude far exceed mine.

But pain is no excuse, at least not a good one. Just because it’s difficult does not mean it’s acceptable to avoid it. The truth in this situation is that I can’t come to a full acceptance of her progressive disease because the disease keeps changing, so once I accept it, the disease has progressed and my mom can’t remember what day it is; a short time later, I must now accept that she thinks See’s candy looks like pajamas. It does not stop until the disease stops, and then she is no longer here. There is no good answer or solution; and it seems near impossible to look for a bright side or some positive way to view it all. Sometimes, I’m realizing, it’s best to keep your head down and keep moving forward, to show-up while staying the course, be it a progressive disease or a marathon with an unknown end.