If you had any fun and exciting travel plans this summer, or camps or sports for your kids, you’re probably starting to get the feeling that they’re not going to happen. Just like the spring when, one by one, event after event got nixed, so is the summer. Yes, places are slowly attempting to re-open, but they do so while maintaining difficult, and sometimes impossible, restrictions on the number of people allowed, adequate spacing, and many mask and glove requirements. So even if some of these plans did go forward, they sure wouldn’t be much fun.

This was the realization with my own children’s summer rec swim team. Typically, practice starts the Monday after school gets out and it’s a summer filled with weekly practices and Saturday meets. It’s exhausting at times, but it keeps them busy, active, and socializing with their friends. The board decided (and I am a part of it) that the attempt to try and have a max of eight kids in the pool at one time, along with six-feet distancing for anyone on the pool deck, people occupying the bathroom, or waiting outside to get in, was just too much for parents to enforce or comply with. Couple that with constant required temperature checks and you have a rigid, restrictive, and depressing summer rec team.

Still, accepting that fact was hard on my kids and me. This has been our regular summer for the past five to six years. It is something routine and expected. My kids are dying to feel some normalcy and be around their usual teammates. Now, like everything else with this virus, it’s changed. And that’s still hard to take.

So, we are accepting and dealing with the frustration, disappointment, and sometimes anger, about more changes to plans, be it summer swim team or that trip we were thinking about (insert anyplace here, we had no idea yet). And I am also trying to re-think what summer means, then and now.

Before, it was always about trying to keep my children occupied and not let them become screen zombies, while also staying active in some way. Summer was never really that relaxing time with “beach reads” and sunbathing, not when your kids are small, and not before that when there was always work or summer school. Summer has never been that idyllic, carefree vacation time, for me anyway. But can it be now?

And this is where the “let’s make the best of it” side comes in. Maybe summer can be somewhat relaxing for all of us. Instead of sweating at swim meets, working the meet computer software and waking up very early to do so, maybe we take the summer off. Yes, it will be challenging to keep my son’s Fortnite marathon at bay, or to make my nearly teenager daughter do something more than lie around and complain of boredom, maybe we can do different things instead. No home schooling, no rushing to practices, and hopefully, no ensuing arguments over frivolous things (being really optimistic there). 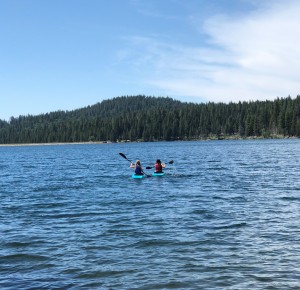 What that might look like, I still don’t have a clear picture of yet, but I told my daughter that we will be visiting lots of places with water in lieu of a pool (and thankfully, we can do that where we live in the middle of nowhere). For those of you who had that great trip planned, the disappointment and the pain of getting refunded is probably extreme, and I am sorry about that. No one wants to continue this way. But, can we find ways to make the best of it? We can wait (which many of us have a hard time doing) until it’s safer to go on that trip (because it really wouldn’t be much fun right now anyway). In the grand scheme of things, so far, we have had two seasons of one year altered from the way we expect them. That’s six months out of the many years that we live. Yes, we can get through it, children and adults too.

So go ahead and admire my optimism right now, but by August, I’m sure I’ll be praying for open schools!

Previous: Weathering the (Mood) Storms During the Virus Shut-Down
Next: Quarantine Limbo Day 108 – What are We Doing?