A new year brings people thinking about eating healthy again, since they completely stopped doing it during the holidays. I’m one of those people too. For the past three years some friends and I have done a cleanse at the start of January, which means cutting out

everything you ever loved about eating. It can be torturous and grueling at times, but it does the job. It clears out the junk I’ve been consuming and the habits that started forming as I reached for another dessert, another glass of wine, another handful of chips… Once the cleanse is over, I am mostly in the groove of eating well again.

That was last Sunday and so far, I’m still doing pretty well. I haven’t gone back to my favorites for fear of starting some avalanche of eating those banned foods I had cut out for the last three weeks. But an article I recently read got me thinking. It was entitled “How I Ditched Dieting for Good,” and it was about the fairly new idea of eating intuitively. What does that mean? I wondered the same. Essentially, it’s means eating what your body wants, when it wants it. So, stopping all that “can’t have that, mustn’t have those,” thinking and just eat what you want. What?! This sounds too good to be true, right?

According to this article, and some blog posts, the idea is to trust yourself and your body about what you want to eat, and basically, eat it! Here are some guiding principles:

-Forget diets and diet culture, for many they are a short-term solution to a problem. You can do them and lose weight, but then soon go back to gaining it again.

-Use a Hunger-Fullness scale to judge when you are truly hungry. That means asking yourself if you are really hungry in that moment (or maybe you just need water), as well, as stopping when are comfortably full. Not sort of full and you’ll be hungry twenty minutes from now, or overly full so you’re lying on the couch moaning, actually nicely full.

-Eat what you really want. Ask yourself what you want to eat, and throw away the ideas of “this food is bad and that one is absolutely terrible for me” (which is hard since we’ve been so programmed over the years). Supposedly, if we just let ourselves have what we are craving, we will have a little of it, be satisfied then naturally choose something healthier (true? who knows).

-Eat mindfully. That means paying attention to what you are eating, slowing down, and really enjoying it. That also includes eating what your body craves, not what your emotions do. Scarfing down a carton of ice cream after a bad day is not the idea.

-Be nice to your body, regardless of its size. Part of what keeps us in the cycle of dieting and eating only certain foods is to change our bodies. Eating intuitively means accepting our bodies, regardless of what they look like.

The author of the article initially had a really difficult time throwing away the ideas of dieting or eating only “healthy foods,” but as time 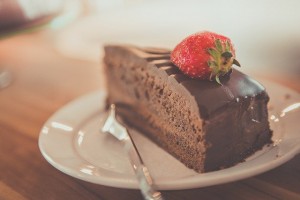 went on and she recognized the pre-programmed messages in her head, she let herself just eat what she wanted. She says that when she wanted peanut M&M’s she would have a few, not the whole bag, and be satisfied. She not only lost weight during this year-long experiment, but said the most significant change is that she doesn’t waste “mental energy agonizing over food or body size anymore.” She says she still stresses over potato chips sometimes, but she doesn’t guilt herself or “promise to make up for it.”

Too good to be true? I suppose it depends on your relationship with food. If you know you eat when you are stressed, depressed, angry, etc, then this probably isn’t the best for you because you can justify eating anything (unless you pay close attention and stop yourself, which is possible). I don’t think I’m ready to jump on this bandwagon yet, but it is definitely food for thought, especially on this snack-laden Super Bowl Sunday.

Previous: Powerless, but Surviving the PG&E Shutdown
Next: 3 (Positive) Things the Virus Has Given Us