A couple years ago, I went on my kindergartner son’s field trip to the local fire station. The firemen explained what they do and why, showed the kids their living quarters, their kitchen, and most importantly, the fire engines. They opened the many compartments revealing axes, oxygen tanks, yards of hoses, and 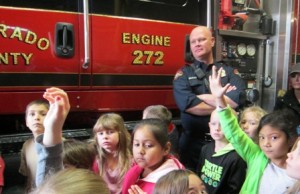 much more. Most of the kids were very interested, watching with gleaming eyes. Then we got to the part which the fireman boasted was the most fun – he opened the door to the passenger side of the truck revealing the “Captain’s seat.” He explained that this is a very important seat, and said that all of the cool tools and technology were used in that spot. Then he asked, “would you like to sit in this seat?” Yes!” they all cried excitedly.

Brief chaos ensued as he asked all of the kindergartners to get in one line. After much pushing, shoving, cutting, and complaining, they were all single file and waiting to get a chance to see the Captain’s seat close-up. The first child was helped up, but as soon as she started to look around, one of the parents called out her name, told her to smile, and took her picture. “Her mom will love this,” the parent said. Then, without even thirty seconds to get a glance at the famed seat, the girl was taken down and the next kid was put in it. Again, the child was asked to look at the camera and smile, then removed from the seat. And this is how it went. None of the kids got to really sit in the seat, feel what it was like to be up there, look out the front window, or explore the various interesting knobs and buttons. I was dismayed to see that the field trip had turned from experiencing the moment to taking a picture of it. 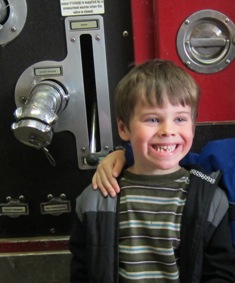 worst part was that the kids knew exactly what to do – get in the seat, turn to the camera, fake smile, picture taken, get down for the next kid.  Only one boy out in the whole group insisted on sitting in the seat and asking questions about everything around him, and he was quickly encouraged to “get down so someone else can have a turn!” A turn at what? I thought. The kids will see their pictures and probably like them, and being five years old they probably won’t remember the field trip too much, but how much more valuable would it have been for them and their little working brains to sit in the Captain’s seat and pretend they really were the captain of the fire truck? Something could have sparked inside one of them as they explored and examined all of the new things they saw there. But instead, we take a picture of the moment and we rush them off for next kid’s photo opp.

How often does that happen? I see it all of the time. Parents telling their kids, “Okay now I need a picture” right when the kids are in the middle of something fun, thereby ending the fun and spontaneity of that moment. Trying to pick it up again sometimes works and sometimes doesn’t. It’s not just our kids we do it to, we also do it to ourselves. Think about a recent time where you went somewhere new and exciting – a trip to the Eiffel Tower or standing at the edge of the Grand Canyon. Did you stand there and take in the sight? Breathing the air and marveling at the height and scenery around you? Or did you get there, quickly look around, make a few comments, say “come on, let’s take a picture”? The typical scenario of what happens next is the person stands there looking down at his phone blocking the way for everyone as he uploads it to show everyone his moment that he wasn’t experiencing because he was too busy taking a picture of it and posting it.

A friend of mine said, “it’s all about instant gratification, they want everyone to know they are having fun in their perfect lives so they can feel good and be reinforced about their experience.” Is this true? I hope not. I’m also not bagging on every picture taken in a special place. I love taking pictures and I do it often. I torture my kids mostly because I just enjoy photography and I like looking back on pictures.  My computer always has some type of slideshow running and I even take out those old fashioned photo albums occasionally.

More than likely, we will look back on the picture of my son in the Captain’s seat and enjoy it, even though he won’t remember it. Still, we would benefit from occasionally just being in the moment and feeling it; and we need to let our kids do it too, especially them, because they are watching and learning how to take a picture of the moment like we do.

So next time, if we need to take the picture, maybe do it while they are looking in wonder at something or laughing hysterically at something they just saw, experiencing this brief moment in time for all it’s worth.

Previous: Do We All Get Softer with Age?
Next: 5 Things for a Fulfilling Life