This election year has been one of confusion and instant polarity. Although both parties have slowly polarized themselves over time, and it seems they both think “you’re either with us or against us,” this year has mixed up many declared Republicans and Democrats. Some politicians are supporting the opposite candidate because they cannot stand the one who represents their party. For the “average voter” the choice between “him” or “her” has been a difficult one. Some people are staunchly on one side or another, which has led to many family and friend disagreements across the country, but most of us are still unsure about who to vote for, which leads us to the “the fear vote.”

Voting out of fear is when you cast your ballot for a certain candidate because you fear having the opposing candidate win.  I have been led to voting in this way many times. This year I have heard, “He’s going to start world war three, so I’m voting for her,” or “She’s a liar and will take away my gun rights, so I have to vote for him,” among other reasons, all based in fear of what the other candidate might do or might be. Most people would say that they have no choice, but to vote that way. “There is no one to agree with! They’re both terrible!” I disagree. There must be some stance on a given issue that a voter could share with one of the candidates. Instead of constantly fearing the unknown, sit down and think about what you do agree with regarding each candidate’s issues. Try to wipe away all the muck that has been thrown around (quite heavily) and ask yourself what is important to you and who represents those values, then just vote for whoever that is.  Excuse yourself from arguing with people about who did what, or why he or she will be the worst president in the history of the U.S., and go on with your life.
And now, I will get down from my soapbox  after this little poem.

10/14/16 addition: I think I need to change my tune since all of the allegations against a certain candidate and the women he has treated “indelicately” let’s say. Even if I thought he was a worthy candidate at some point, when people come forward and repeatedly make the same claims thereby showing his immoral character, I would say that voting from fear is understandable and acceptable. The president has a very public persona and I do not want my son to have such a role model, nor do I want my daughter feeling the effects of men who think it’s acceptable to treat women that way.  So I will be voting out of fear – again. But I still believe in my poem below. People’s opinions are theirs, even if I don’t agree with them!

Instead of putting the wall up by Mexico,
We put it up around the U.S. in total.
No imports or exports, no immigrants or ex-pats,
Nothing in and nothing out, be it fruit, phones, or yoga mats.

Instead of keeping us safe, however,
We now learned to fear each other.
Sides were divided, groups were split.
Instead of living together,
We changed our tactics.

We couldn’t see the outsiders to hate,
We looked inside and found each other to discriminate.
Until we stop finding differences, we won’t be free.
We’ll keep on seeing the “other” in you and me.

So, instead of building walls and blaming the other guys,
Maybe we should look at ourselves and remove the disguise.
We are all human, in the end,
Preposterous as it sounds, we could all be friends.

But more than likely, we’ll keep on this way.
“You’re wrong, I’m right” is what we all say.
And so the walls continue to climb,
Instead of our country, it’s either yours or mine.

And yet, it’s not difficult to stop and say,
“Yeah, well, that’s just, like, your opinion, man.”
And go on with your day.

Thanks to “the Dude” for the inspiration. 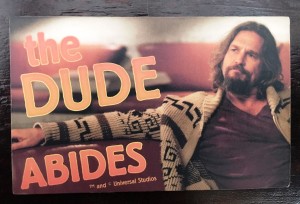